It may take an elephantine dose of healthy scepticism to banish the feeling that this essay by the political King of Spin on the topic of Winners is merely a pachyderm-sized ego promotion but there are some key learning points for school leaders in this top seller.

So, too busy to read all of this… 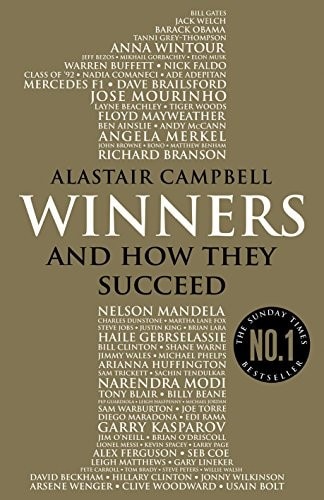 Weighing in at 520 pages and containing a plethora of anecdotal tips from too many to count Winners’ tucked away in the folds and creases of 20 chapters under a grey outer skin made the jumbo analogy an easy one. However, it is not always a ponderous journey and the structure and style does enable the less patient to learn and benefit from a random ‘pick and go’ reading strategy.

The main gist of Campbell’s work, as it says on the tin, is to identify the traits and qualities from the real life stories of winners across the worlds of sport and business. Including, as you would expect from Tony Blair’s communication guru, a fair number of ‘inside’ stories from his political experience.

There may be few “OMG, really?” moments from the vast number of celebrity insights. A quick check of the index startlingly suggests that winners need to be bold, innovative, data-hungry with the right mindset, a clear strategy and the ability to turn setback into advantage (resilience). No way! And some of the ‘lessons’ from the success stories are unsurprisingly banal. Winners work hard apparently, they hate losing, never give up and according to the last line, simply win because they have to but, for this reader there were two important learning points and one big idea essential for all school leaders.

The first comes from the opening section on the ‘Holy Trinity’ of Strategy, Leadership and Teamship with a useful clarity on the differences between Objectives, Strategy and Tactics.

Objectives are the definition of your success – for Dave Brailsford and Team Sky this was to be the first British team to win the Tour de France. Strategy is a succinct statement of how you will achieve your target. For Apple it was quite simply, simplification which Campbell argues as the ultimate in sophisticated strategy and responsible for putting design above engineering that revolutionised the way we look at computers forever. For Sir Clive Woodward and England’s rugby team it was ‘excellence in everything’ that was the driving force for world cup glory in 2003.

But it is essential to avoid confusing this with Tactics which are a series of related actions needed to deliver the Strategy. Here Campbell uses the three time electoral success of the Blair machine to highlight the differences.

Tactics: Anything and everything that showed the Labour Party had changed including sticking to spending limits, new approach to business and unions etc

Irrespective of your political colour it is difficult not to admire the clarity and brevity of thinking that enabled the consequent ease of communication and understanding. A useful framework for a school improvement strategy?

There are some good quotes on Leadership: “A leader never stops learning, never stops teaching, and never stops looking to the future” (Clinton) though Campbell doesn’t really provide any real analysis of substance here. It is a kind of ‘spray and pray’ approach, hoping that something will land with the reader though there are better ideas following under Teamship (once you get past the indulgent reference to his beloved Burnley FC!)

Brailsford’s thinking on dealing with the energy sappers is certainly one that will chime with many school leaders. He cites the Donald Tosti model, a four quadrant matrix of High/Low Energy v Attitude with a clear, succinct and in some cases, brutal set of tactics for people assigned to each one of the four boxes.

Positive attitude and high energy is where you want people to be through recruitment, management and/or coaching. However find someone in the positive attitude + low energy, labelled a spectator and it is “FIFO” time but unlike Team Sky you are strongly advised by this reader to check in with your HR provider first.

The more enlightened leader will see it as a development model and if there are too many staff in the spectator box or alternatively acting as cynics (high energy + negative attitude) then surely the first tactic for a winning leader should be an honest review of own leadership and communication style.

However, for this reader there are two further learning points.

Firstly, the power in the leader in finding the way to the right question at the right time to find the right solution for success. 2002 and Sir Clive Woodward was struggling to understand why the England rugby team started each game on fire but, despite intense conditioning programmes came out sluggishly for the second half.

Consulting with a top international coach, who knew nothing of rugby Sir Clive was stunned at the question that came back after talking him through the half-time team-talk. “Why don’t they put on new shirts? It might help them to think like they do at the start of the match”

Simple solution arrived at from consulting a top, external’ coach who knew nothing of the sport or the context and the rest, as they say is history with world cup glory a year later.

But it is in the penultimate chapter around the British monarchy as the surprising but enduring winner that the really important messages emerge.

What is it, he muses that enabled a deeply conservative institution to not only survive its ‘annus horribilis’ but go still further to reinvent itself and win the hearts and minds of generations globally?

The starting point, it seems was the key appointment of the business supremo, David Airlie as Lord Chamberlain to overhaul and rebrand the royal household in 1983 bringing a clear sense of purpose within a far more efficient business model. Critically though the strategy was underpinned by reference to long established core values: identity; continuity; recognition of achievement and service.

And this is an important learning point for school leaders to take away.

Whatever the challenge and no matter how tough the times are, always ensure that what you do in every facet of leadership can be referenced back to your core school values. These are the touchstones that define who and what you are and it is not just about how children/young people behave inside the school gates.

However, the one big inspirational idea is almost a throwaway right at the end and seems to have been largely missed by Campbell. An unnamed courtier of King Juan Carlos is credited with recognising the “communism of humanity” in the Queen’s branding. The way that the monarchy reaches out to all stakeholders whatever their race, nationality or beliefs, capturing their aspirations, hopes and fears and bringing them together in a stunning, flag waving, happy experience of loyal connectivity.

And surely it is this that makes the British monarchy the “business school case study in the management technique of rebooting” (Tristram Hunt) and the most important learning point for all school leaders. Going beyond values and bringing people together, giving a sense of belonging and mutually supporting each other without judgement to contribute collectively and individually towards one long term vision and purpose. A common journey.

Now, if Campbell had spent more of the 520 pages on this theme his book for this reader would have been much more of a … well, winner!