In a nutshell: Adapt – Why Success Always Starts With Failure – Gary Edwards 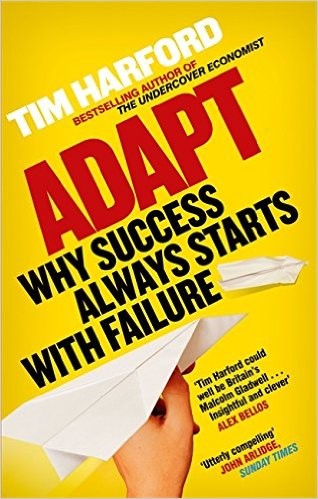 Even the FT weighs in with a “terrific new book” that is a powerful argument for companies and people to recognise the limits of their wisdom and to “embrace the muddling of mankind”. So is it worth the 265 page read with another 31 pages of notes? Well not entirely but I’m agreeing with Time Out there are a few “memorable nuggets”.

The central theme is hardly earth shatteringly innovative. Essentially all organisations must learn and evolve or die and basically that is it, though there are several compelling accounts of success salvaged from the jaws of failure. And this is probably the single biggest learning point for school leadership – far from seeking to eradicate failure through excessive management scrutiny and an ethos of fear of not meeting expectations, leaders in fact should embrace and encourage systemic failure as a learning culture towards real achievement.

Harford’s book is full of historical accounts to underline this message and cites considerable statistical data to demonstrate that companies will go through a Darwinism experience of evolve or die but in all honestly unless you are an economic historian you only need one story to get the message. And without a doubt the one for me was the way Harford describes the eventual successful emergence of the Spitfire when even Churchill was convinced the war would be won with much bigger planes capable of much heavier artillery firing off in numerous directions simultaneously. The early Spitfires were, no bones about it, rubbish and subsequent models an improvement but served only to reinforce the myopic prejudice of the likes of Churchill. However the design engineers were zealous innovators and had the backing of an eccentric millionaire to keep up faith and produce yet further re-designs and as they say, the rest is history. This is a good read.

And it is also the big message from Harford. Organisation s need to find safe havens and sufficient rewards to encourage innovation, experiment and a culture of learning from failure, not trying to factor it out of the system at the first opportunity.

To back that up there is one further anecdotal story of note, Google’s 20% time policy. Again it is hardly rocket science but the underlying principle is that people at work are unlikely to put their full body and soul into something unless they really enjoy it and care about it. And so the general policy at Google is that 20% of a workers’ time can be on any project they want so long as it is deemed to be worthwhile. Having crossed this threshold and the criteria is very open it is then the role of management to provide the resource to make it happen.

Risky? For sure but Harford attributes this initiative as providing the breakthrough environment, the ethos of experimentation for much of Google’s big innovative developments and it is a policy that has been adopted by many other successful Silicon Valley companies.

So think about it. How many of your staff would you say spend 20% of their time on a project or initiative they really care about and enjoy and where they are free with the active support of school leadership to explore and develop with the freedom to fail and the freedom to learn from that failing? Be honest.

And that is pretty much all a busy school leader needs to take from this book but don’t under-estimate the power of the message. As Harford himself concludes this culture of continuous failure requires real courage but without it big, true success is not possible.

“Ever tried? Ever failed? No matter. Try again. Fail better”

Not convinced by that quote then how about the legendary American basketball star, Michael Johnson

“Missed more than 9000 shots in my career. I’ve lost almost 300 games. 26 times, I’ve been trusted to take the game winning shot and missed. I’ve failed over and over and over again in my life. And that is why I succeed”